What is a Red Tide?

When traveling through Suffolk County, you may notice the waters are red from time to time. These blooms are quite common in the Huntington-Northport Bay complex and have also been detected in Shinnecock Bay, Mattituck Inlet, and Sag Harbor Cove.

The name “red tide” is a reference to the reddish-brown color of the water caused by an algal bloom. If you’ve ever witnessed this phenomenon, you may be wondering what causes the red color and whether red tides are harmful.

What is a Red Tide?

Red tides are algal blooms generally caused by a type of phytoplankton known as Dinoflagellates. When under bloom conditions, this phytoplankton can turn the water red (hence the name “red tide”).

A “bloom” occurs when water conditions change to provide an abundance of nutrients for the algae which grow to the point where they occur in such numbers that they discolor waterways.

When a red tide is caused by an organism called Alexandrium, it can be associated with an illness known as Paralytic Shellfish Poisoning, or PSP. Alexandrium can produce a potent biotoxin called saxitoxin. This toxin then contaminates local shellfish populations which eventually make their way onto your dinner table.

PSP can be lethal in some cases, and symptoms will depend on how much of the toxin is ingested.

Symptoms of PSP can include:

Investigations by the Office of Ecology in the late 1980s and early 2000s have found Alexandrium in Suffolk County waterways. However, no cases of PSP have been reported. More recent investigations by NYSDEC found blooms nearly every year in Huntington-Northport Bay from 2006 – 2012. These findings led to shellfish bed closures in the area.

While PSP is a major concern, red tides can also lead to mass fish deaths and other issues. Like other types of harmful algal blooms, red tides drastically deplete the amount of available oxygen in the water.

Oxygen depletion occurs when the algae die off and start decomposing. As they decompose, they consume the oxygen in the water. When oxygen levels get dangerously low, fish either flee to healthier waters or die off.

Algae blooms can also block sunlight, making it difficult or impossible for underwater plants to survive.

Red tide algae can easily be carried long distances, which further contributes to the problem.

What Causes a Red Tide?

There are several factors that can contribute to algal blooms like red tides. Warm water temperatures, low salinity and calm waters are a few causes of red tides, but high levels of nitrates and other nutrients can also contribute to harmful algal blooms.

What Can Be Done About Red Tide and Harmful Algal Blooms?

To help combat the problem and restore the area’s waterways, Suffolk County and the State of New York are offering septic update programs to help cover the cost of replacing old septic systems. These programs provide rebates that may cover most or all of the costs of upgrading to a new system that properly removes nitrates.

PrevPreviousWhat is a Brown Tide?
NextWhat are Cyanobacteria?Next 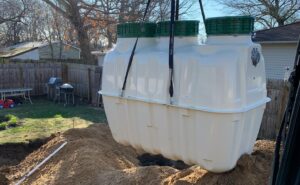 Harmful algal blooms are on the rise, damaging local ecosystems and costing billions of dollars in economic losses.

Harmful algal blooms impact local water sources and environments. Rust tides are one of the many concerns for local officials who want to revamp local